Welcome to the show notes for the Disney Dream Girls Podcast, show number 330, for Sunday 30th August 2020. If you want to listen, whilst reading these notes, just click the player below or alternatively find us on iTunes, Libsyn, Stitcher Radio, or any good podcast catching apps.
On this week's show, Michelle and Jayne re-cap their summer, celebrate a much loved Disney character, and look ahead to Autumn in the Disney parks.  On the 30th August 1936, the very first cartoon strip solely devoted to Donald Duck was published in newspapers. So to celebrate this, Michelle quizzed Jayne about her Donald Duck knowledge. So look below to see how you would do on these questions?

It is fairly easy to find Donald at Walt Disney World and he can be found in Mexico (EPCOT), Dinoland USA (Animal Kingdom), Silly Sideshow (Magic Kingdom), and at the entrance to Disney Hollywood Studios.

At the Disneyland Resort, he can be found around Main Street (Disneyland Park) or around Buena Vista Street (DCA).

Over in Disneyland Paris, he can be found around the hub area or either in Fantasyland or Adventureland. For the Studios, he is usually in the Production Courtyard.
Our next feature reviewed the Walt Disney World and Disneyland Paris offerings for the Halloween season. 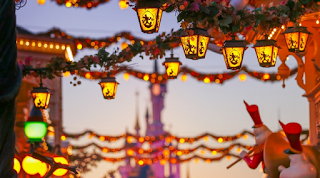 The season starts on the 26th of September and runs through to the 1st of November.  There will be no soirees to attend; early park closings; no parades and no fireworks.  But there will be lots of villains out and about and characters in their spooky finery. 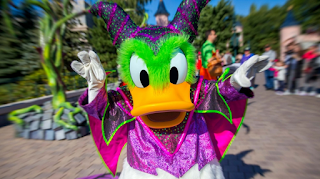 What we are excited about is the food and drink offerings - it sure looks like Disney is upping their game for this season and we can not wait to report back on these. 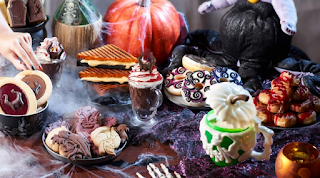 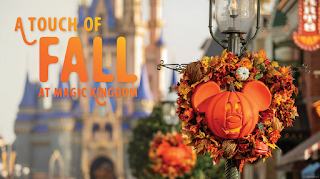 This year, the season starts on the 15th of September and will run until 31st October. As with Paris, the experience will be very much paired back but Main Street USA will be decorated and there will be an abundance of treats and merchandise to tempt you. 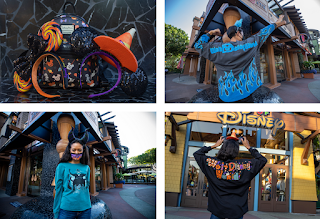 The big news is costumes - during this time guests are going to be allowed to attend the parks in costumes (something previously reserved for the Halloween party). However, guests must abide by the costume rules of Disney and of course - wear a face mask. 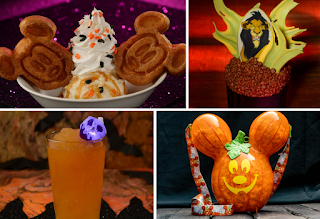 We are incredibly fortunate as many listeners have already let us know that they will be travelling to the parks during this time and we can not wait to see their pictures and hear their trip reports.

If you wish to support us financially and keep the show advert free, visit us at https://www.patreon.com/DisneyDreamGirls and there you can find out the benefits of doing so including exclusive additional podcasts!

Welcome to the show notes for the Disney Dream Girls Podcast, show number 329, for Sunday 23rd August 2020. If you want to listen, whilst reading these notes, just click the player below or alternatively find us on iTunes, Libsyn, Stitcher Radio, or any good podcast catching apps.
On this week's show, Michelle chats with our podcasting friends - Kat and Lewis from Dis Down Under - to share memories of past trips and also what we are missing the most. 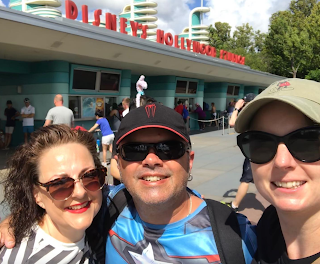 A lot of our memories go back to 2018 and our bumper WDW and Disney Cruise Line trip. 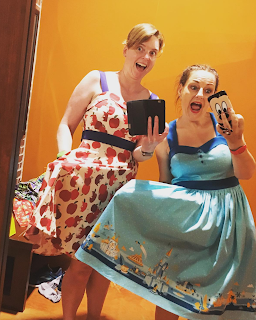 A favourite memory for Michelle and Kat was when they tried on dresses at the Disney dress shop. 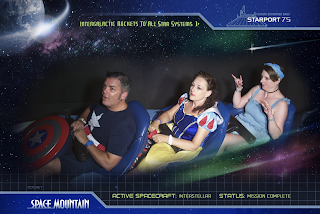 But another was our night at Mickey's Not So Scary Halloween Party, where Captain America, Snow White, and Cinderella met up and rode Space Mountain! 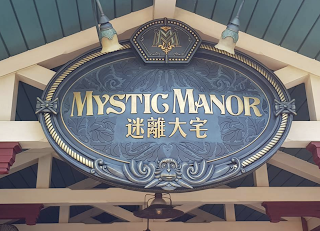 Then, Kat and Lewis go around the world of Disney and talk about what they would be doing in each park if they were there right now. 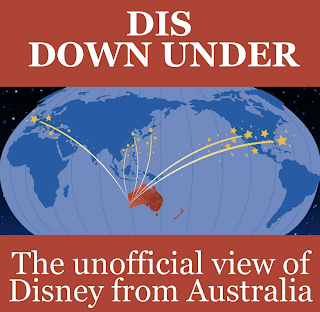 That is about it for this week's show notes and we hope you enjoyed listening in. We would really appreciate it if you would share the show with your Disney loving friends via social media and those all-important links are below.

You can find us @DisDreamGirls on Instagram and Twitter. We have the Disney Dream Girls page on Facebook as well as the Disney Dream Girls Podcast Family.
If you wish to support us financially and keep the show advert free, visit us at https://www.patreon.com/DisneyDreamGirls and there you can find out the benefits of doing so including exclusive additional podcasts!

You can find our friends at Dis Down Under and all of their amazing other shows by visiting: https://thegentlemenofpopculture.com/
Posted by Disney Dream Girls Podcast at 20:06 No comments:

Welcome to the show notes for the Disney Dream Girls Podcast, show number 328, for Sunday 16th August 2020. If you want to listen, whilst reading these notes, just click the player below or alternatively find us on iTunes, Libsyn, Stitcher Radio, or any good podcast catching apps.
On this week's show, we welcome a duo of DLP fans to share with us their experience of making two trips to Disneyland Paris since it re-opened last month. This show was recorded prior to the change in quarantine rules when travelling to France from the UK.
Meet Daniel and Jamie; a pair of devoted Disneyland Paris fans. Daniel has been visiting DLP since 1992 whereas Jamie is a more recent convert, having been visiting for the past ten years. Once the parks re-opened they made two trips on consecutive weekends and they kindly joined us to share their opinions on the park with us.
Hotels
At the moment, the only Disney 'on-site' hotels that are accepting guests are the Newport Bay Club, Disney's Santa Fe, and Disney's Hotel Cheyenne; though this is changing constantly. 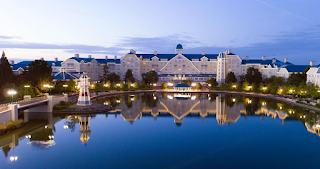 Daniel and Jamie stayed at the Newport Bay Club as well as at an off-site hotel and were impressed by the Covid measures in place in both locations. The found no need to use the bus from Newport Bay Club as the walk was quite short and the security procedure straight forwards to gain entrance to the parks.

In-Park
Once in the park, there are plenty of sanitising stations (pre-eateries, shops, and at the entry of attraction queues), and cast members will insist and watch you as you use them. Masks are to be worn and removing them for attractions or photography is not tolerated. In fact, they had seen people been escorted out of the park for non-compliance.
Whilst they do not have any 'relaxation zones' (a place where you are permitted to remove your mask in the park), if you are seated and eating food or having a drink it is permitted to remove your mask.

Food
They were impressed by the table-service meals they had (as well as the quick service) but found the buffet's re-imagined offerings catered more for a European market so for their second trip they decided to cancel their bookings.
Bookings can be made via the Disneyland Paris App or by telephoning 60 days in advance and this is highly recommended.

Characters
They are both self-confessed Disney character junkies and as you can see from the pictures - DLP has done a fabulous job making the characters visible but socially distant.
Prior to visiting they urge you to download the Lineberty app as a lot of the experiences in DLP have to be made via this.

That's about it for this week. To find out more about our fabulous guests, you can find them on Instagram and youtube @dandjdisney or on their DLP dedicated page on Facebook - Disneyland Paris Advice.

327 A Mixed Bag Of Disney Weird and Wonderful

Welcome to the show notes for the Disney Dream Girls Podcast, show number 327, for Sunday 9th August 2020. If you want to listen, whilst reading these notes, just click the player below or alternatively find us on iTunes, Libsyn, Stitcher Radio, or any good podcast catching apps.
On this week's show, we start with sharing some Disney history from this day, before moving on to sharing some weird and  wonderful sights from our past travels to the Disney theme parks.

It Is All About Mary But Not...
On 9th August in 1899, Pamela Lyndon Travers OBE, was born as Helen Lyndon Goff  in Maryborough, Queensland, Australia and sadly passed away on the 23rd April 1996. 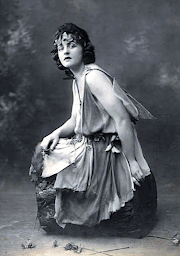 Photo Credit Literary Ladies Guide
After her father's death – when she was 7 – the family moved to a family members sugar plantation in New South Wales and were supported by a great aunt. She changed her name to Pamela after World War I and began an acting career but had to support herself and wrote for a Sydney newspaper.
In 1924, she left Australia to set up home in England but travelled and following a trip to the Soviet Union, her first book was published called Moscow Excursion. Shortly after, in 1934, she fell ill with pleurisy and as she was recovering took to writing a fantasy story. 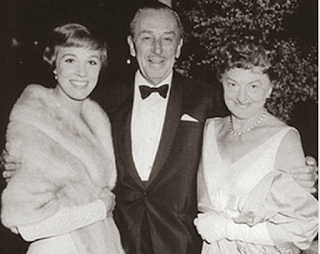 Mary Poppins was the first of eight books ranging from 1934 to 1988 and were illustrated by Mary Shepard (she was the daughter of the illustrator for the first Winnie the Pooh books).

During World War II, she was working for the British Ministery of Information in Manhattan, New York. Around this time, Roy Disney got in touch about allowing Disney to use her Mary Poppins character.


She never married and had an adopted son called Camillus.
Strange Theme Park Sights
During our trips to the parks, we have seen many a strange thing. So we thought we would share some with you on the show... Michelle's top two were:
Nappy change in the Dumbo soft play pre-queue but leaving the dirty diaper.
The preacher who got escorted from the property.
And you will have to listen to the show to hear the rest! Do you have a weird and wonderful Disney story to share with us? Let us know!

Michelle also announced that she has booked a trip to stay at the Newport Bay Club hotel in Paris later in the year but there will be more about this oncoming shows.

If you wish to support us financially and keep the show advert free, visit us at https://www.patreon.com/DisneyDreamGirls and there you can find out the benefits of doing so including exclusive additional podcasts!
Posted by Disney Dream Girls Podcast at 12:26 No comments: